← back to
Sacred Bones Records
Get fresh music recommendations delivered to your inbox every Friday.
We've updated our Terms of Use. You can review the changes here.

Coming Down: Sessions in April 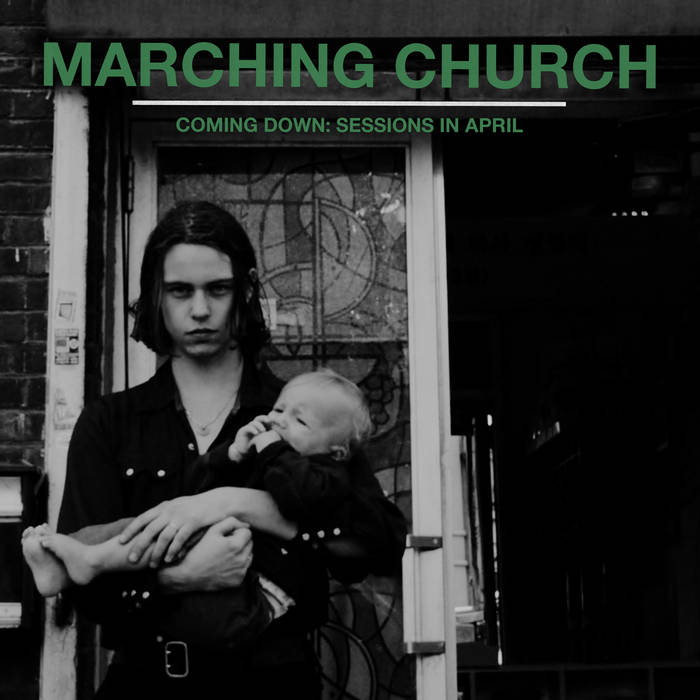 hidden_reed the only jazz ill ever need Favorite track: Coming Down.

Babette de Jong A slow thoughtful build into the depths of an emotive dark soul that resonates with my darkest reflections. Can't get enough... Favorite track: Coming Down.

Marching Church, formerly an outlet for the mostly solo musical experiments of Elias Bender Rønnenfelt (Iceage, Vår), metamorphosed into a full band during the sessions for their 2014 LP, This World Is Not Enough. The installation of a permanent supporting cast of collaborators did nothing to tame the project’s wild spirit, and that record was an eclectic, eccentric mix of post-punk, improv, soul music, and more. With the Coming Down: Sessions in April 12", Marching Church reaches even further afield, backing an intensely personal A-side with a fully instrumental 21-minute free jazz odyssey.

“It’s an excerpt from a two-hour long improv session,” Rønnenfelt said of the track. “Which I guess was an attempt at playing jazz music, though no one involved had any experience playing jazz.”

The group in that improv session included Kristian Emdal and Anton Rothstein of Lower, Frederikke Hoffmeier a.k.a. Puce Mary, Cæcilie Trier a.k.a. CTM, Bo Høyer Hansen, and Nils Gröndahl. The chemistry they achieve playing jazz despite admittedly novice chops in the genre is impressive. Piano, strings, and horns all appear on This World Is Not Enough, but here, they’re liberated from rock songwriting altogether. The result is the most outré Marching Church recording to date. But it almost wasn’t a Marching Church recording at all.

At first, the idea of releasing a side-long jazz cut under the Marching Church moniker was too far out of left field, even for Rønnenfelt. The alternative he concocted might have been even crazier. “The original idea was to release the recordings under an alter ego, and no one was to know it was us,” Rønnenfelt explained. “I had written a whole story about this Colombian guy from the slums, and his rise and downfall in the cartel business. In his old days he had attempted jazz piano, but without much talent. But we now reveal ourselves as being behind this, without even having had the chance to fool anyone.”

Expanded lineup of the band, including trumpet player Jakob Emil Lamdahl and Iceage guitarist Johan Wieth, is set to record a new full-length in January

Marching Church, formerly an outlet for the mostly solo musical experiments of Elias Bender Rønnenfelt (Iceage, Vår), metamorphosed into a full band during the sessions for their 2014 LP, This World Is Not Enough.

Bandcamp Daily  your guide to the world of Bandcamp

The Hammer and The Relentless from the Boston band Malleus stop by for a chat.